An explosion at a night market in Davao City on Friday night, September 2, killed at least 14 people and injured more than 60, Presidential Spokesman Ernesto Abella said.

“There are many elements who are angry at our president and our government,” Andanar told DZMM radio, after referring to the drug traffickers and the militants.

“We are not ruling out the possibility that they might be responsible for this but it is too early to speculate.”

In a statement early Saturday, September 3, Davao City Vice Mayor Paolo Duterte confirmed that 10 people died on the scene following the explosion, which occurred around 10:20 pm at the market along Roxas Avenue.

Four others later died after being rushed to the hospital.

“Right now, we cannot yet give a definite answer as to who is behind this as we are also trying to determine what really exploded,” he added.

Earlier, witnesses said they heard a loud bang and saw smoke from the site of the explosion, a massage area in the market. Ambulances rushed to the scene, carrying the injured on stretchers. 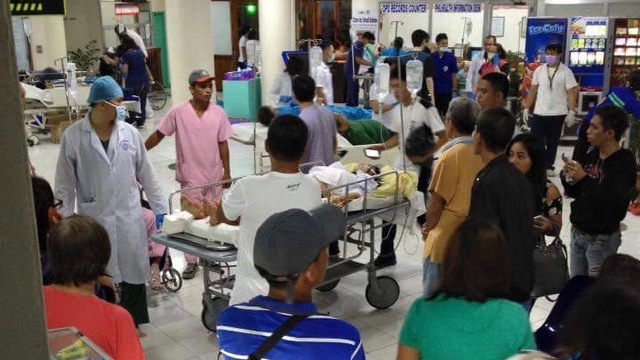 WOUNDED. Some of the injured blast victims were rushed to the San Pedro Hospital in Davao City following an explosion at a night market on September 2, 2016. Contributed photo

They were rushed to the San Pedro Hospital and the Southern Philippines Medical Center for treatment.

“We call on all the people to be vigilant at all times and report to the police any suspicious packages or persons,” Gaerlan said.

A statement from the Office of the Presidential Spokesperson also assured the public that there is “no cause for alarm.”

“While no one has yet claimed responsibility it is best that the populace refrain from reckless speculation and avoid crowded places,” the statement read.

“There is no cause for alarm, but it is wise to be cautious,” the statement added.

Davao is part of the southern region of Mindanao, where Islamic rebels have waged a decades-long separatist insurgency that has claimed more than 120,000 lives.

Communist rebels, who have been waging an armed struggle since 1968, also maintain a presence in rural areas neighboring Davao.

However in 2003 a bomb attack blamed on Muslim rebels at Davao airport killed more than 20 people.

As president, Duterte quickly launched peace talks with the communists, who last week agreed to an indefinite ceasefire.

Duterte has also in recent weeks pursued peace talks with the two main Muslim rebel groups. Its leaders have said they want to broker a lasting peace.

However Duterte has ordered a military offensive against the Abu Sayyaf, a small but extremely dangerous group of militants that has declared allegiance to Islamic State and vowed to continue fighting.

Fifteen soldiers died on Monday in clashes with the Abu Sayyaf on Jolo island, one of the Abu Sayyaf’s main strongholds about 900 kilometers from Davao.

Presidential spokesman Andanar referred to the fighting on Jolo when he speculated on who may have been behind Friday’s bomb attack.

Andanar also raised the possibility of drug lords fighting back against Duterte’s war on crime.

Duterte has made fighting drugs the top priority of the beginning of his presidency.

Security forces have conducted raids in communities throughout the country to arrest or kill drug traffickers.

More than 2,000 people have died in the war on drugs, and Duterte has vowed he will not let up until drugs are eliminated from society.

Duterte was in Davao on Friday and went straight into meetings with security chiefs following the blast, according to his aides. – with reports from Agence France-Presse/Rappler.com