Feast of the Dormition

On the Feast of the Dormition of the Theotokos, Deacon Silouan and I were privileged to serve Divine Liturgy at the chapel of St. John Maximovitch on Mindanao island, in the village of Santa Maria in Davao del Sur. There are at present only two ROCOR chapels in the Philippines, and this is the first of them. In fact, this was the first liturgy to be served for the members of this parish and the first time that they received Holy Communion. Not all of the parish was able to be present since this is a workday. The entire parish will be present for the liturgy to be served this coming Sunday.

They have worked hard preparing for services. They downloaded from the internet recordings of the Divine Liturgy, then translated the responses and hymns into their language, Cebuano, and then practiced them. As a result of their hard work, they were able to do the responses for most of the service, and sang out loudly and enthusiastically.

Tomorrow we will return to the chapel in the morning to do the small Blessing of Water, after which we will bless the chapel and the homes of the parishioners. Friday, Dn. Silouan will teach them more of the hymns of the Church and we will serve vespers; Saturday we will baptize catechumens, hear confessions, and serve vigil. Sunday we will serve Divine Liturgy and perform the service of Holy Matrimony for a number of the couples. It’s a full schedule for the next few days.

After liturgy we were able to spend a few hours with the parishioners and hear about their journey to the Orthodox Church. They are led by some former priests, who left Roman Catholicism and joined the Filipino Independent Church, in which they continued as priests. However, they are now Orthodox laymen. Perhaps in the future they will be able to receive preparation for the priesthood, though this is not something they are asking for at this time. They are simply grateful to have been received into the Church. In fact, Alpheos stated quite clearly that he did not want anyone to think that he had become Orthodox for the sake of becoming a priest.

The former clergy repeatedly stressed that there are dozens of chapels, and hundreds of people in both the Independent and the RC churches who want to know about Orthodoxy, and are inclined to become Orthodox. One of the former priests had over 1,000 people in his congregation. He had another chapel with over 800 people. There are many chapels with several hundred people each. They are longing for clergy to help them learn about Orthodoxy and to enter the Church.

What is needed they said is for experienced Orthodox clergy to come to Davao to help them to educate and convert the people. There are dozens of Independent chapels and RC chapels that are no longer holding services because the priests have departed, leaving the people without services and sacraments.

In Manila, the Antiochian clergy repeatedly asked us to remain or come back permanently in order to train them and assist them in their work. A well known apologist for the Roman Catholic Traditionalist movement told me that he hoped and prayed that our bishop would send clergy to the Philippines to establish what he called “full blooded, undiluted Russian Orthodoxy.”

Here in Davao it is the same story. The people ask Dn. Silouan and I several times a day to please return and remain here to raise up churches and train the people and the clergy. Usually I reply that “I was sent to Nepal. Then I was told to come to the Philippines. I will go where my bishop tells me to go.” My heart goes out to them. There are such wonderful possibilities here for church growth, so many needs and yet no clergy to live here among the people and give them the help that they need. Today when I was asked once again to come help them, I replied as usual. The response was “there is no church in Nepal. Here there are no clergy, but there are churches and Orthodox people. We need you here.” Lord, have mercy.

Both Fr. Dn. Silouan and I are agreed that if clergy can be found to come here, the place to begin is here in the region of Davao. There is a plentiful harvest to be reaped here. One of our parishioners has a radio station on the island and is prepared to begin broadcasting about the Orthodox Church. He said it would be quite easy to organize meetings with large groups of people who are already asking for instruction about Orthodoxy. With experienced Orthodox clergy, regular services could be organized in various locations and inquirers classes could be conducted regularly. Together with the former clergy, Fr. Silouan and I believe it is a realistic hope, that in time there would be many Orthodox churches here to form a rather large diocese of the Church.

The need for experienced clergy is made more pressing by the presence of schismatics who have brought much confusion to people. They can easily claim to be the only valid Orthodox church in the Philippines and are quite convincing to people who know only what they are told by the schismatics. Here in Davao, there are no authentic Orthodox clergy to counter their false claims. Repeatedly we have been told that it is imperative for ROCOR to send “foreign clergy from the outside” of the Philippines to represent the voice of the First Hierarch and Holy Synod of the ROCOR. This will carry authority for the people.

After the Liturgy for the Dormition, one of the former priests spoke for the group and said how grateful they are to Metropolitan Hilarion for caring for them and sending clergy to them so that they can receive the Holy Sacraments. They feel that at last a bishop is taking care of them. He told me that they finally feel cared for and safe. May God continue, through the good office of our Metropolitan, their bishop, to care for them and provide for their many liturgical and sacramental needs. 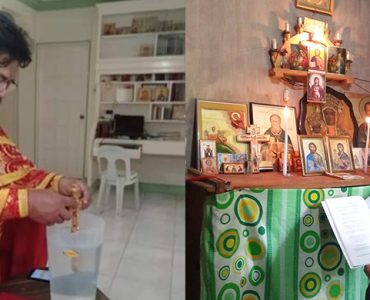